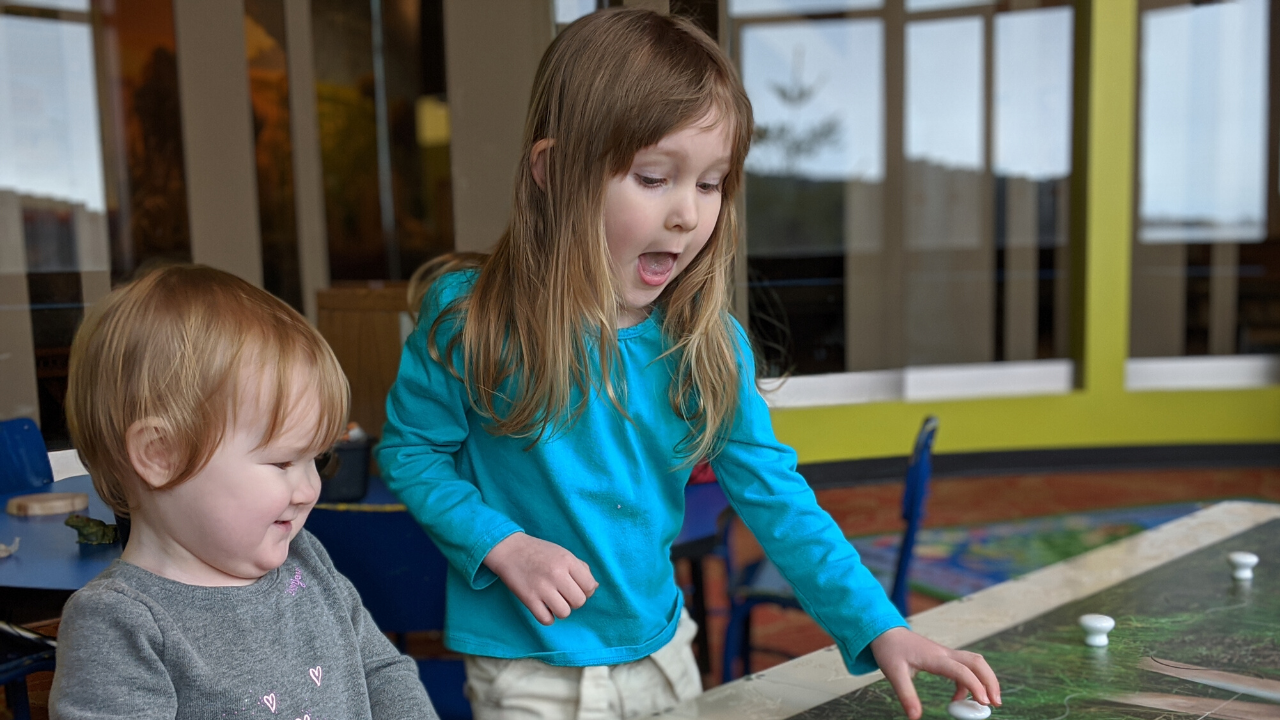 This post may contain affiliate links and we may earn commissions when you make a purchase through these links (at no extra cost to you). See our disclosure policy for more details.

My husband was planning a trip to Austin MN for work and, a couple days before leaving, he asked if the girls and I wanted to go with him.

I don’t know why I hadn’t thought of it myself!

It was the perfect opportunity to get out of the house for a couple days and explore a new town. I wasn’t really sure what to expect, so I quickly searched ‘things to do in Austin MN with kids’.

The top two things to do in Austin MN: the SPAM® Museum and the Jay C. Hormel Nature Center. (I was told that the YMCA is a great place to bring kids too, but we didn’t have a chance to go there.)

I had always imagined Austin to be a bigger city, but it was actually pretty small. Which was great, because that made it really hard for me to get lost!

So, what did we do with the kids in Austin, Minnesota? 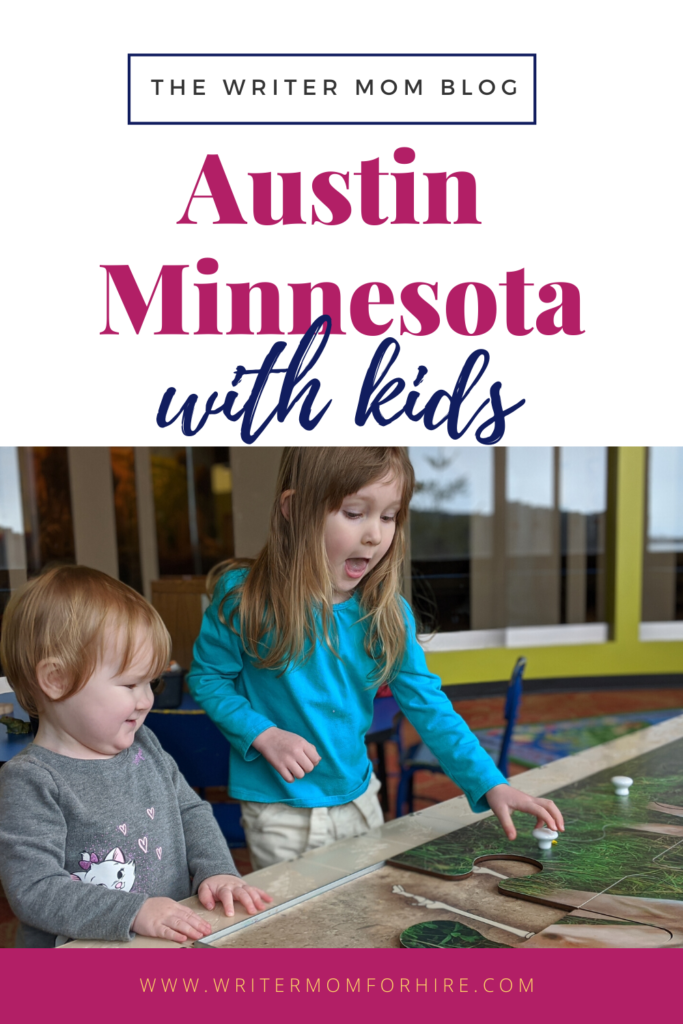 It was dinnertime when we got into town, so we drove around trying to find somewhere to eat. We didn’t immediately find anything, so I looked up ‘restaurants in Austin MN’ on my phone.

It came up with a pretty long list of options. However, it was Sunday night, so quite a few of the restaurants were closed. 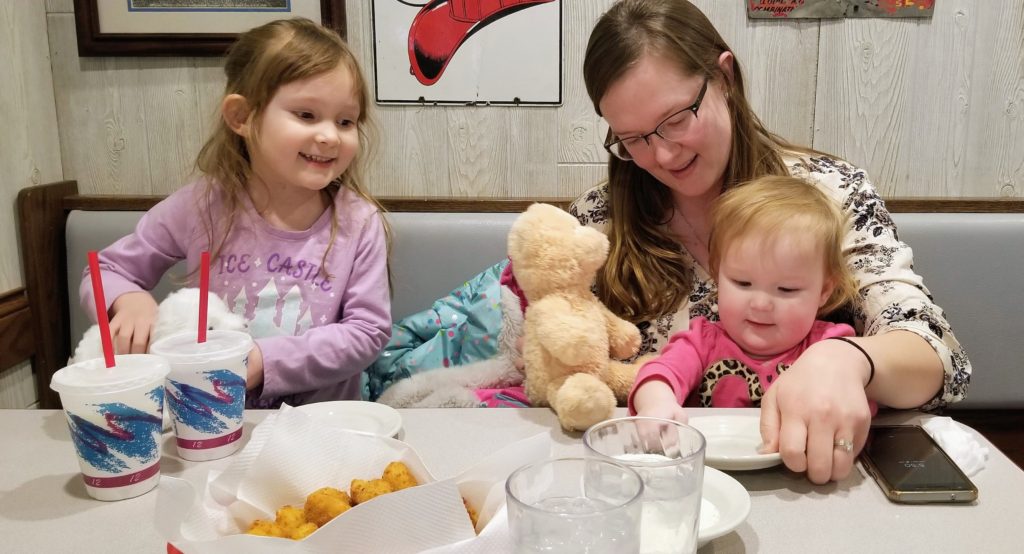 We decided on Kenny’s Oak Grill, a diner serving up “modern takes on traditional diner-style foods alongside of the classics”. 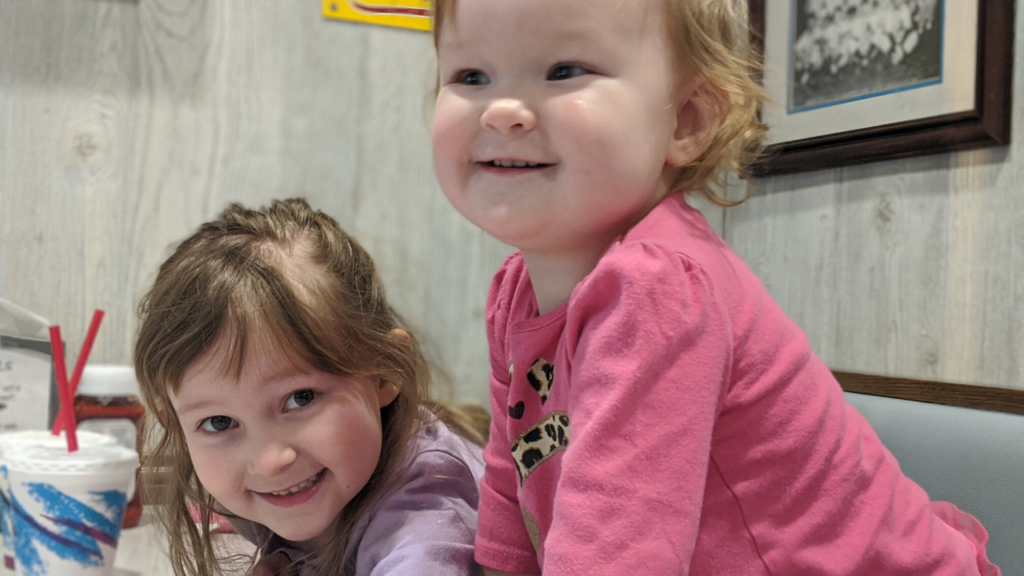 The food was pretty good, and the service was excellent. Dan ordered the special of the night, which was broasted chicken. 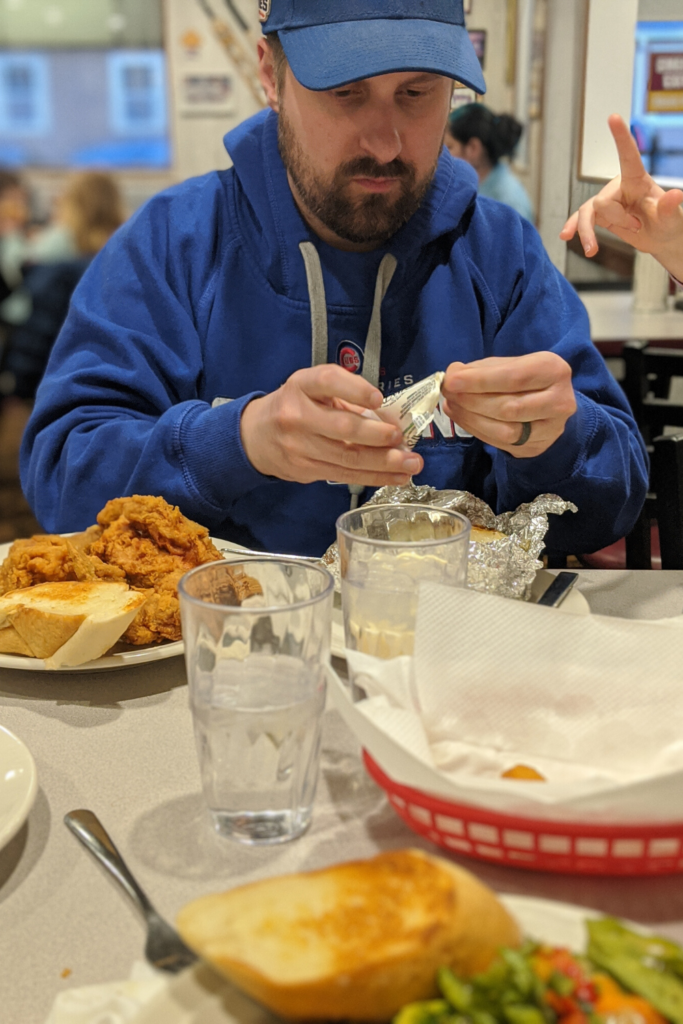 I ordered the grilled salmon and rice with bourbon sauce, oriental veggies, and garlic bread.

Kenna wanted the ale battered fish from the kids’ menu. We also ordered an appetizer of cheddar nuggets, which she loved (probably because she could dip them in Ranch). 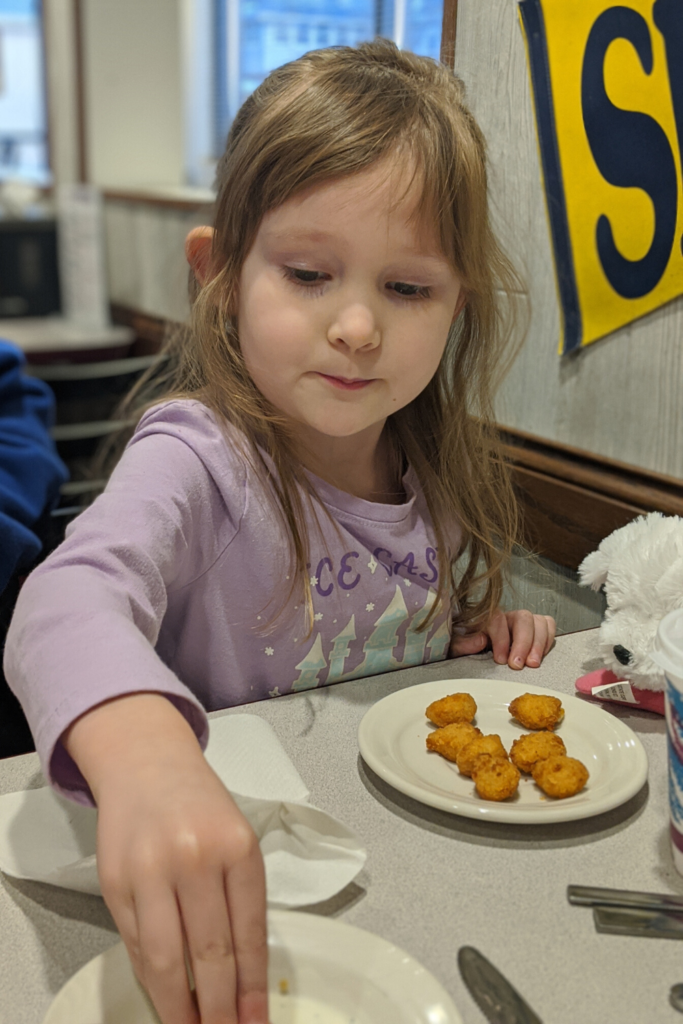 Raelyn hardly ate anything the entire trip; she is working on quite a few teeth right now, so she swiped a carrot stick from Dan’s plate and started gnawing on it.

When I confiscated it — and the huge chunk she’d bitten off — a colossal meltdown ensued. 🙁 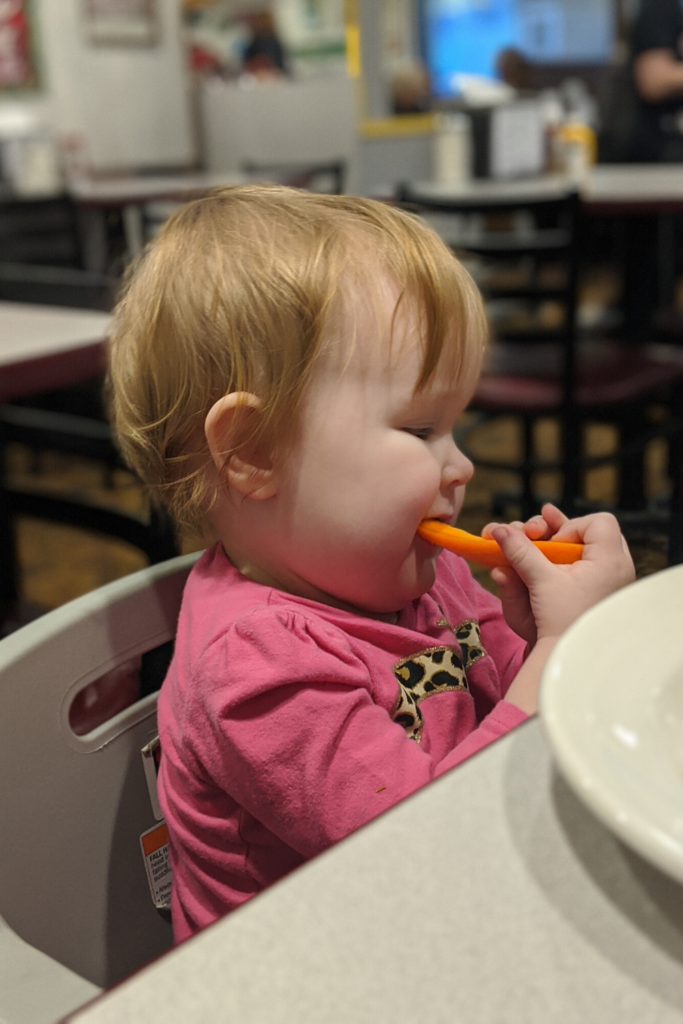 By the time we arrived at the hotel, it was time to get the girls ready for bed. You never know what to expect when staying in a hotel with toddlers!

But other than taking a little longer to fall asleep than normal, they did really well.

Planning an upcoming overnight trip? Here are some tips for planning a hotel stay with kids.

The hotel we stayed at didn’t have a continental breakfast, but they did have a restaurant.

Hoping to save a little money, we decided to go to Hy Vee in Austin MN instead. We ordered a hot breakfast there, since we had a little time before Dan had to be at work. 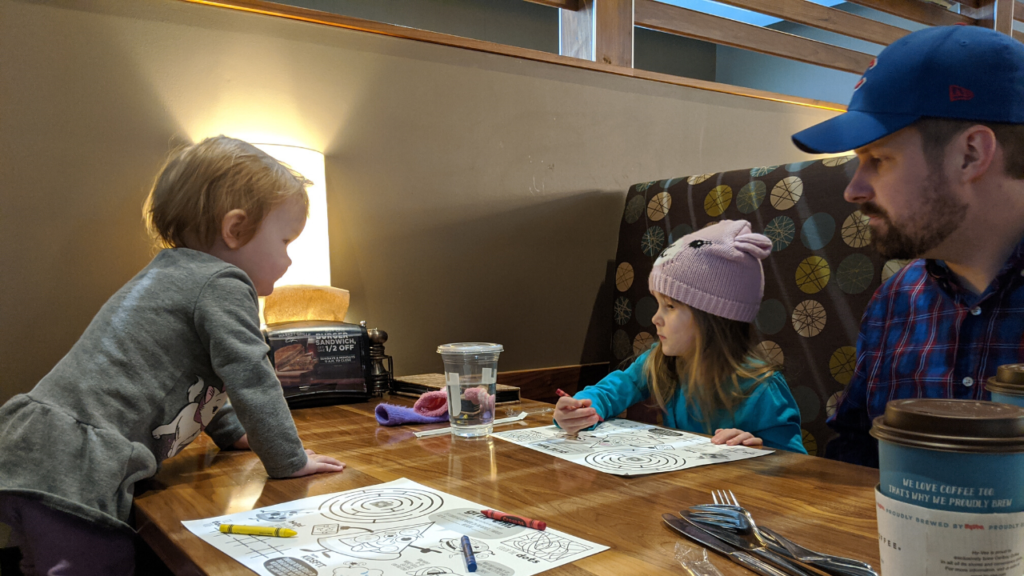 The food was pretty good; it was comparable to breakfast at any cafe.

The employees were really nice and helpful. They even brought the girls some coloring pages and crayons to keep them occupied while waiting for our food.

I ordered a skillet of biscuits and gravy, which consists of two biscuits cut in half and covered in sausage gravy. It was a little too much food, and I could probably have gotten away with ordering a half order.

While the girls and I finished eating, Dan went into the store to buy a couple things for breakfast the next morning. By the time he checked out, it was time to bring him to work.

The Jay C. Hormel Nature Center in Austin MN is free and open to the public. 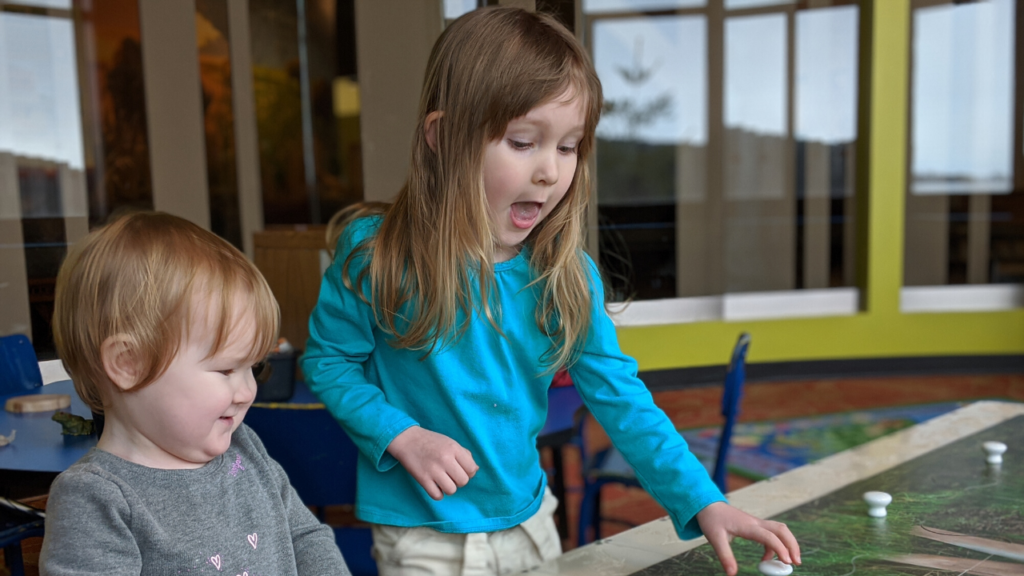 After dropping Dan off at work, I brought the girls to the Jay C. Hormel Nature Center in Austin MN.

We spent about an hour there, much of that time being in the early childhood room. The girls had a great time playing with the animal puppets, making crayon rubbings, and playing with the toys. 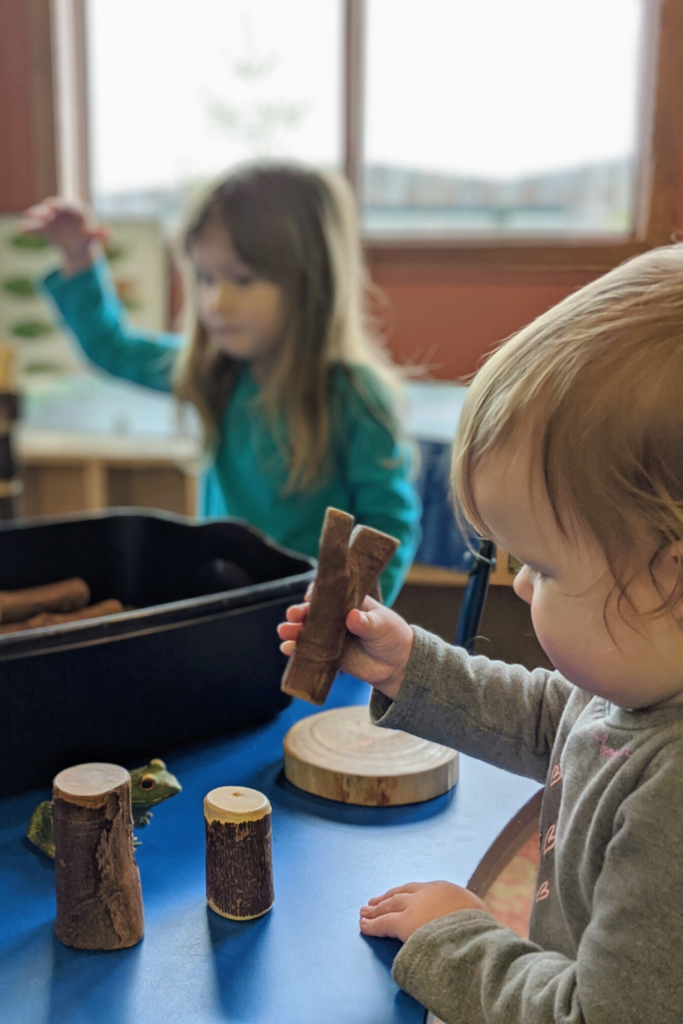 There is plenty for older kids and adults to check out in the Interpretive Center as well, plus there are trails and outdoor activities year-round. 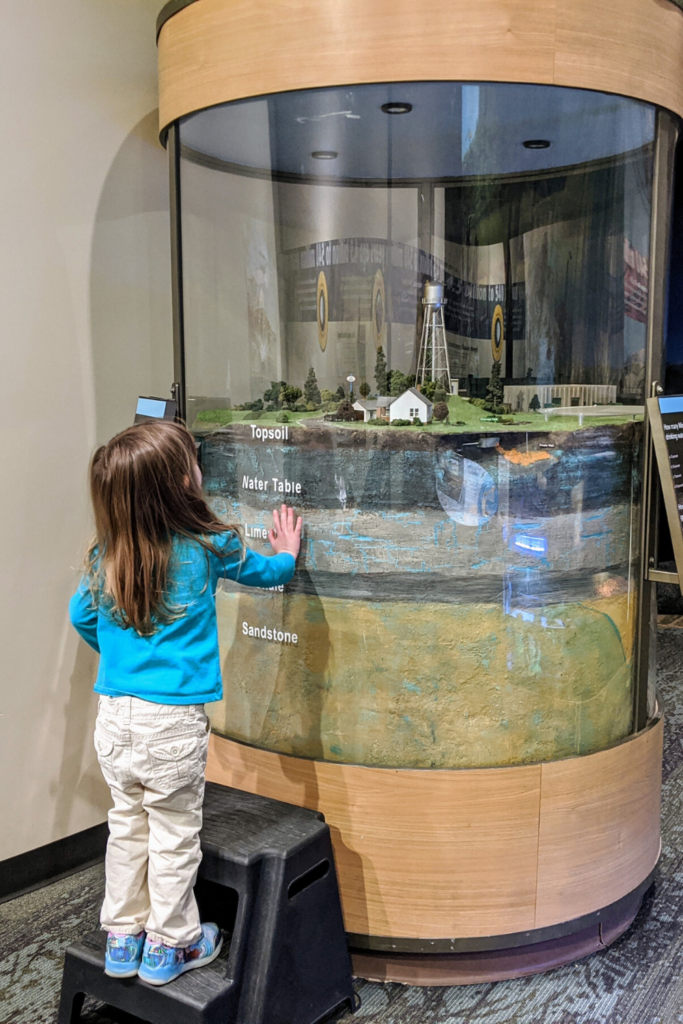 The center takes in birds of prey, so we got to see an owl and some hawks. I think the snake was Kenna’s favorite, though! 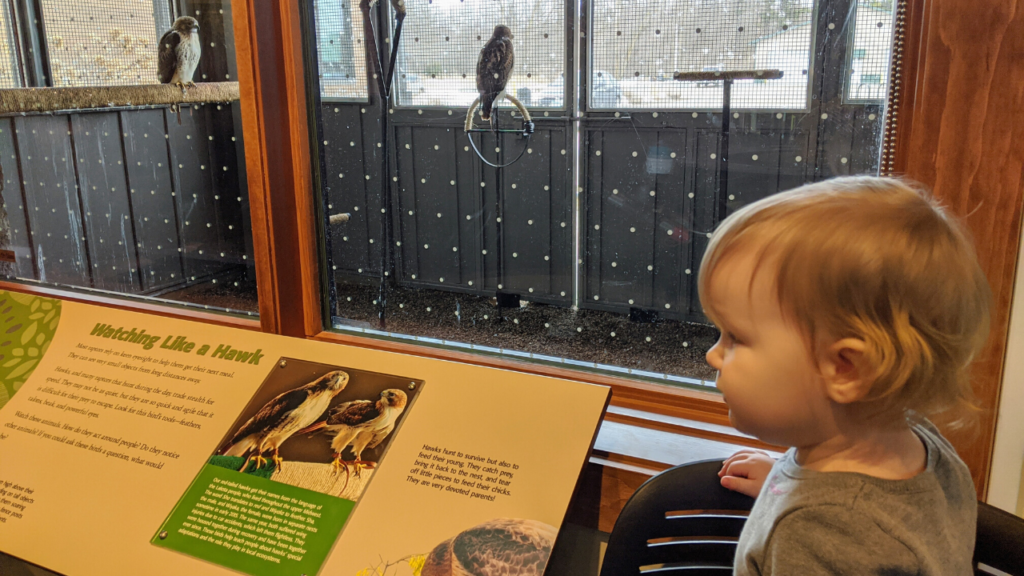 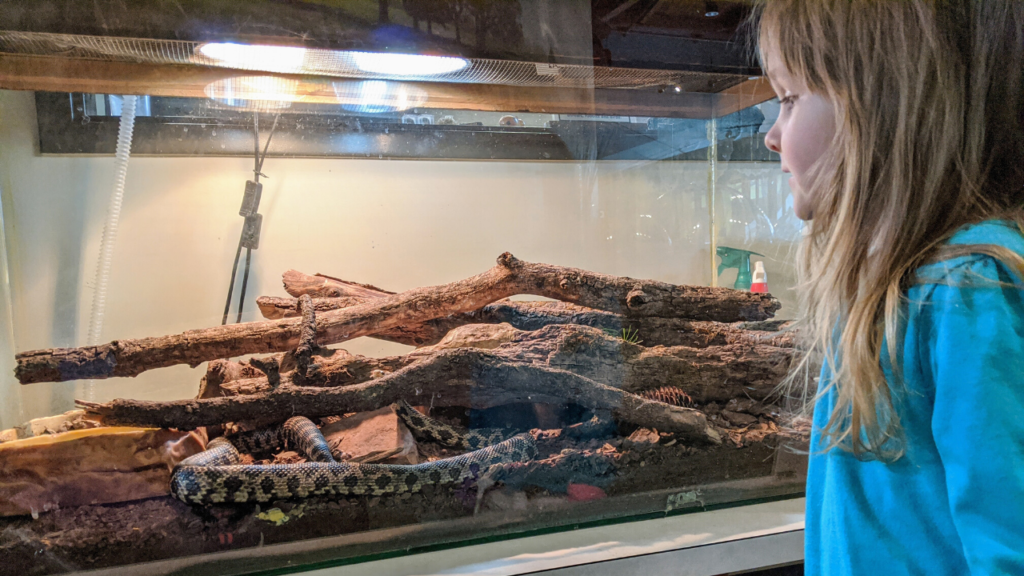 Afterward, we briefly stopped at the Salvation Army, then grabbed some lunch and headed back to the hotel.

I had hoped to get some work done while Raelyn napped, but for the next few hours, she refused to sleep. Finally, we got in the van and drove around so she could sleep until Dan was done with work.

We drove around town for about an hour, and somehow ended up driving the same roads over and over again (as I said, it’s pretty hard to get lost in Austin!).

We had hoped to order pizza for delivery and eat at the hotel, so we could get to the pool before bedtime.

Kenna really didn’t want pizza, though, so I thought the Pizza Ranch buffet would be a fairly quick alternative — and I thought they might have mac ‘n’ cheese, one of her favorites. 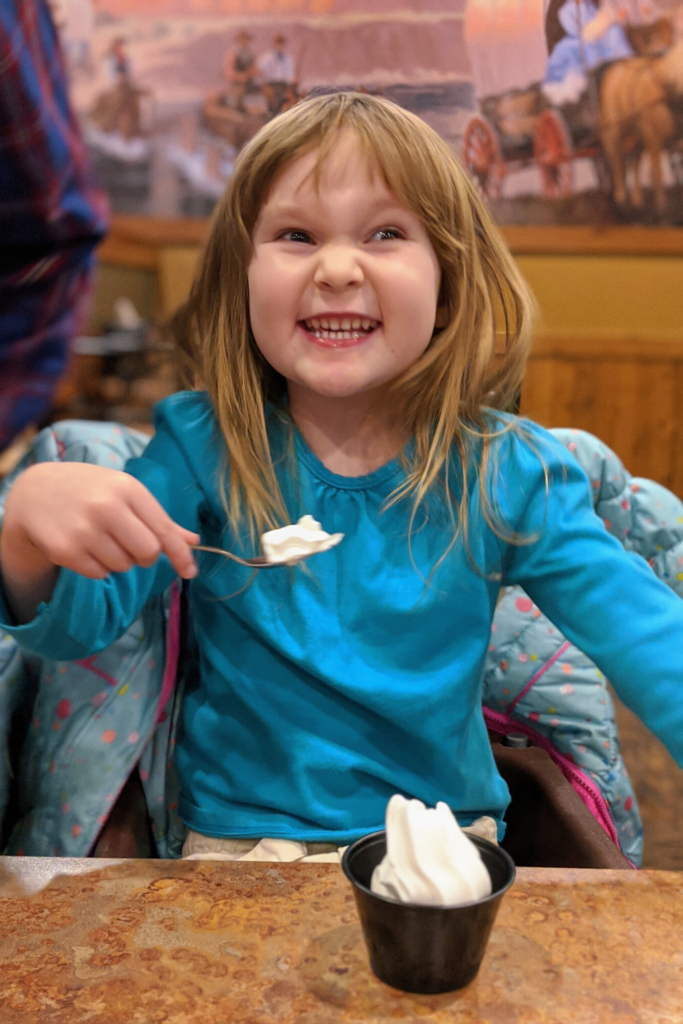 Unfortunately, they didn’t have mac ‘n’ cheese, so Kenna loaded up on salad and veggies (she’s a big salad lover).

Again, Raelyn refused to touch anything we offered — until we got to the ice cream. I’m sure the cold spoon helped soothe her gums!

The service was great.

The Austin All Stars baseball players were helping wait tables at Pizza Ranch that night to raise money for the team, and they were quick to clear the dishes from our table as soon as we were done with them.

We got back to the hotel at about 6:30 so we quickly changed into swimsuits and headed to the pool. 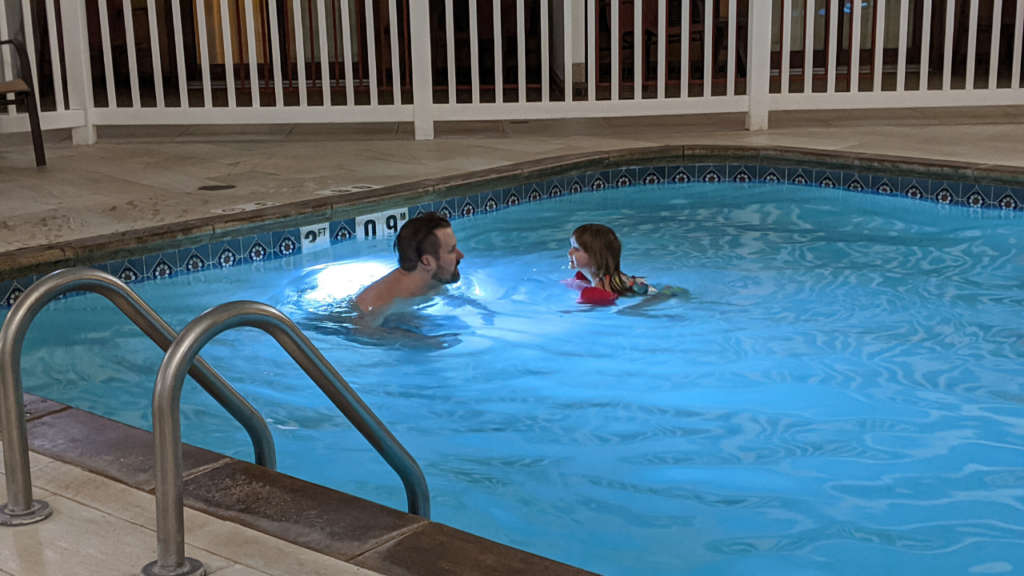 In addition to a fitness center, the Holiday Inn Conference Center Hotel in Austin MN has a kiddie pool, a swimming pool, and a Whirlpool. It was really nice to have the place to ourselves!

We started out in the kiddie pool, but Kenna just wanted to get in the big pool, so Dan took her over there while I tried to help Raelyn get used to the water.

She was unimpressed! It took quite a while to get her used to the water, and she finally stopped clinging to me and enjoyed splashing a little bit. 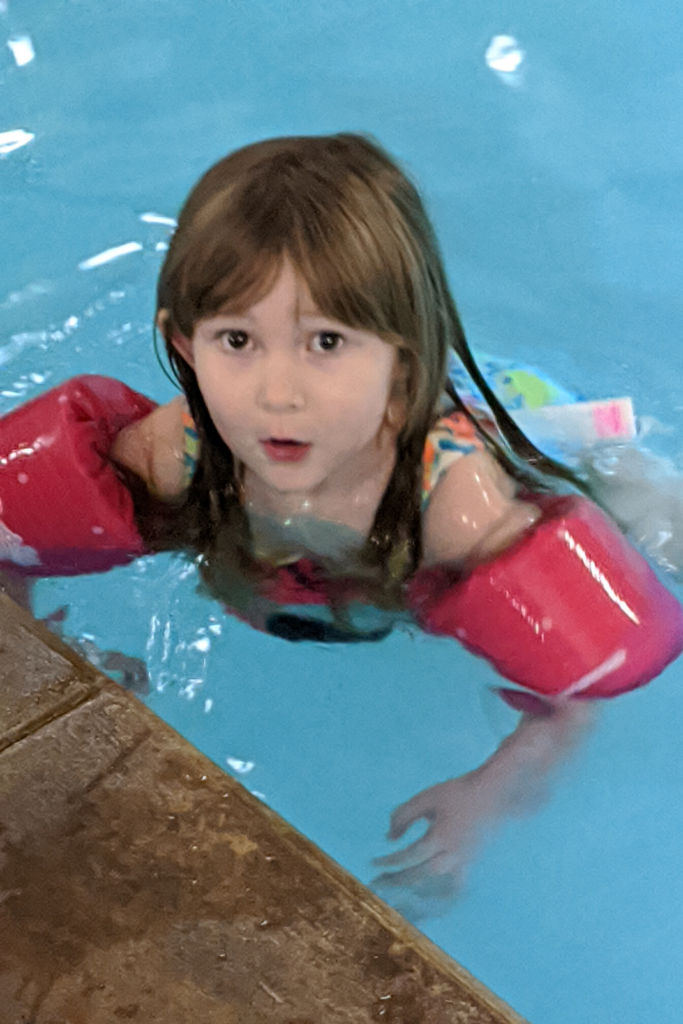 Afterward, the girls got to take a bath together in the hotel room (a rare treat, since we don’t currently have a bathtub at home!). Then, it was time for a snack and sleep.

The next morning, we were up bright an early to drop Dan off at work. I spent the morning packing up and getting ready to check out.

After checking out of the hotel, the girls and I ate lunch at McDonald’s (Kenna’s request).

Dan said that he had eaten a burrito at 1910 Fresh Mexican Kitchen for lunch with some people from work. Although he didn’t say much about it, it sounded like it was pretty good.

The SPAM® Museum in Austin MN is free and open to the public. 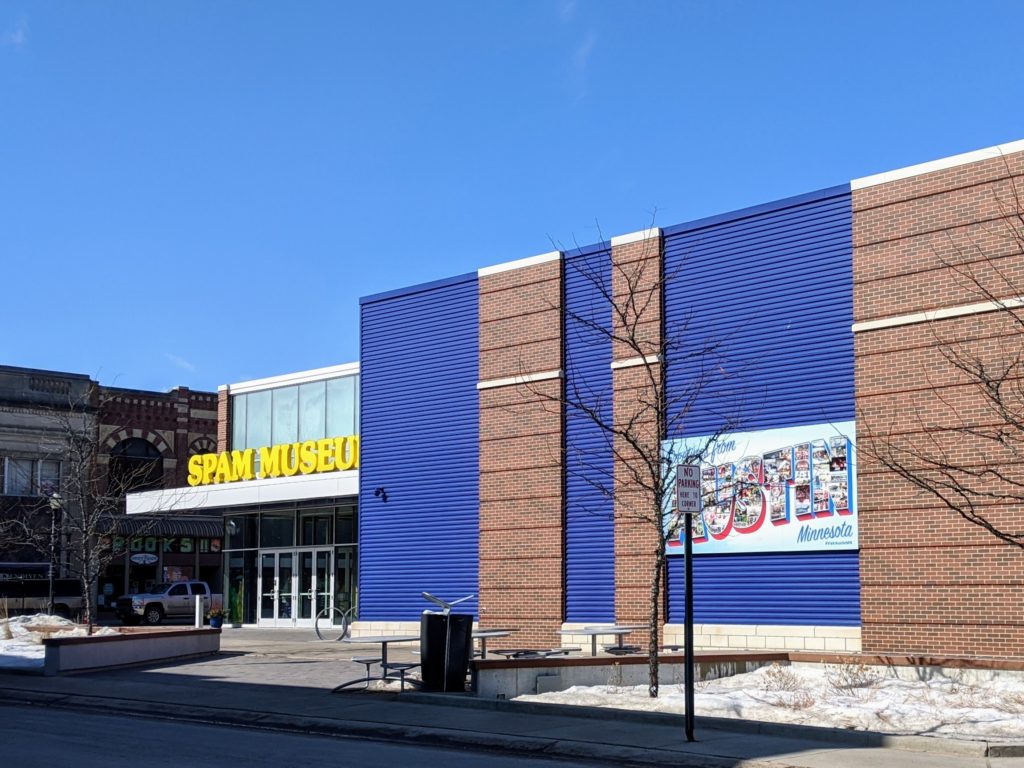 After lunch, I took the girls to the SPAM® Museum in Austin, Minnesota and we quickly looked around before heading to the kids’ play area. 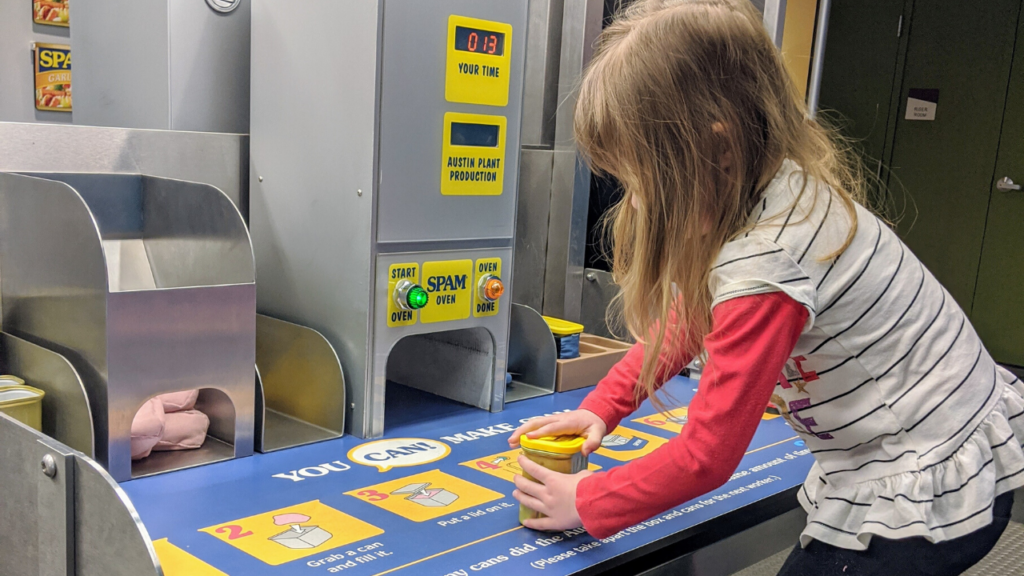 If you have kids and you’re looking for things to do in Austin MN, the SPAM® Museum is a MUST. We spent two hours there (and the girls would have played longer if it was up to them!).

They cooked up some play food in the cute little kitchen, then climbed through the tunnels in the playland.

Kids under three need to be accompanied by an adult, so I climbed in with Raelyn, who had an absolute blast! She squealed with delight as we flew down the slide. 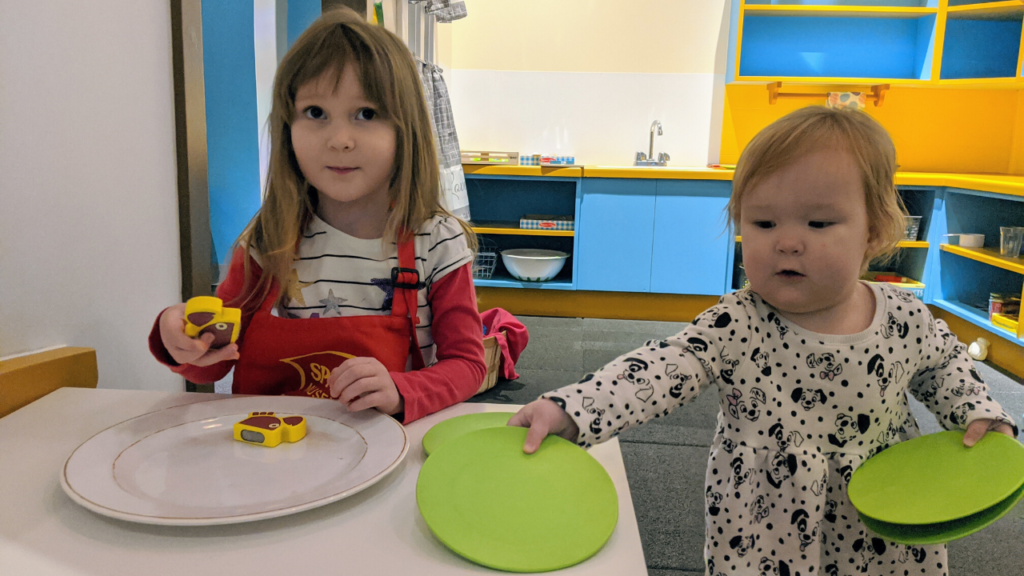 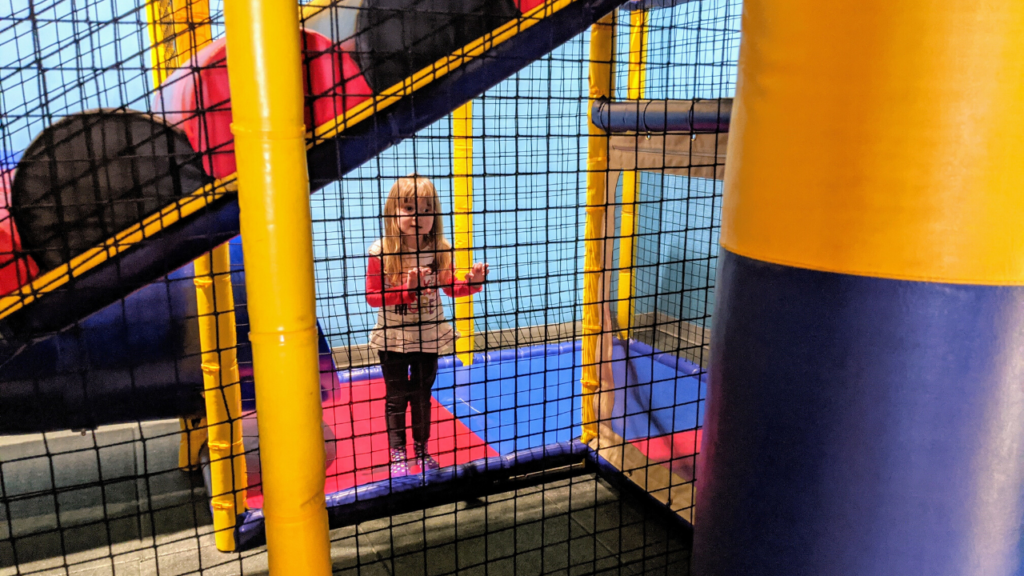 They even have a cute little reading nook, stocked with books for the kids to read. 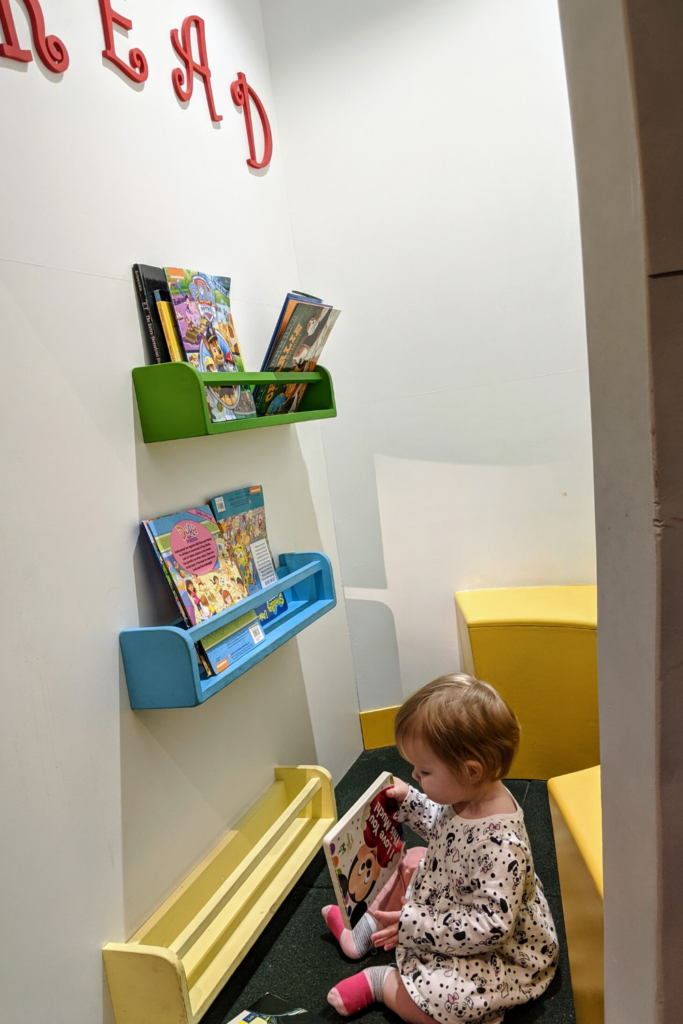 I had planned on walking downtown and checking out some of the shops, but Dan finished up with his work just as we were cleaning up the toys. I was glad, because we had a 5-6 hour drive ahead of us.

So instead, we picked him up and headed out of town.

It was a whirlwind of a trip, but a great opportunity to get out of town and check out some fun, educational establishments in Austin.

Plus, the girls were able to spend more time with their dad than they would have otherwise, so it was a win-win.

Let’s stay in touch! Click here or use the form below to opt in for occasional email updates — and as a bonus, you’ll get a free list of 100+ activities for kids.

Grab the FREE “stay at home” bucket list for kids!

Print this list of 100+ activity ideas for toddlers + preschoolers and they’ll never run out of things to do!

Please check your email inbox to confirm your subscription and grab your FREE download.

If you don’t see it right away, please wait a moment or check your junk mail.

“This is part of the #KidCultureBlogger Link-Up hosted by Jana at mypiccoloitaliano.com the last Saturday of every month where bloggers share their passion for exposing kids to culture through travel, cooking, events, art, crafts, theatre, and other unplugged learning experiences.”

I’m Tonya, also known as Writer Wife to a wonderful husband and Writer Mom to three busy little girls. As the founder of the Writer Mom blog, my goal is to employ my passion for the written word to help families make the most of every moment.

This post may contain affiliate links and we may earn commissions when you make a purchase through these links (at no extra cost to you). See our disclosure policy for more details. Ultimate List of Fun + Unique Things to Do in Minnesota Planning your MN summer vacation itinerary? Kids already saying, “I’m bored!” two… 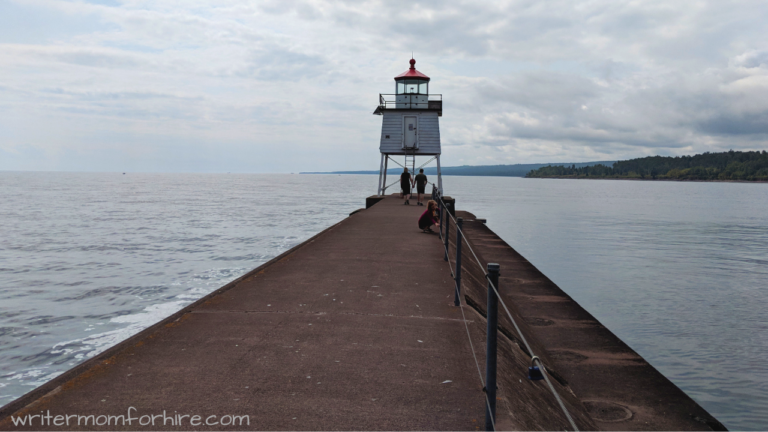 This post may contain affiliate links and we may earn commissions when you make a purchase through these links (at no extra cost to you). See our disclosure policy for more details. Visiting the North Shore of Lake Superior Looking for things to do in Two Harbors, Minnesota? Here are a few things to do… 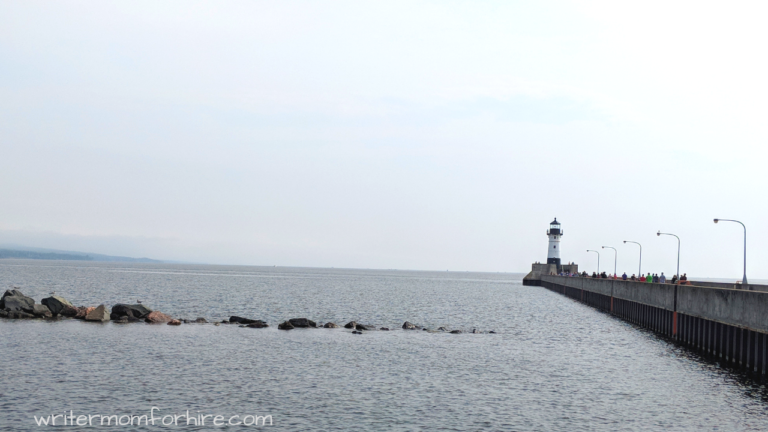 This post may contain affiliate links and we may earn commissions when you make a purchase through these links (at no extra cost to you). See our disclosure policy for more details. A Weekend in Two Harbors and Duluth, Minnesota Planning a trip and looking for the best places on the North Shore MN? You… 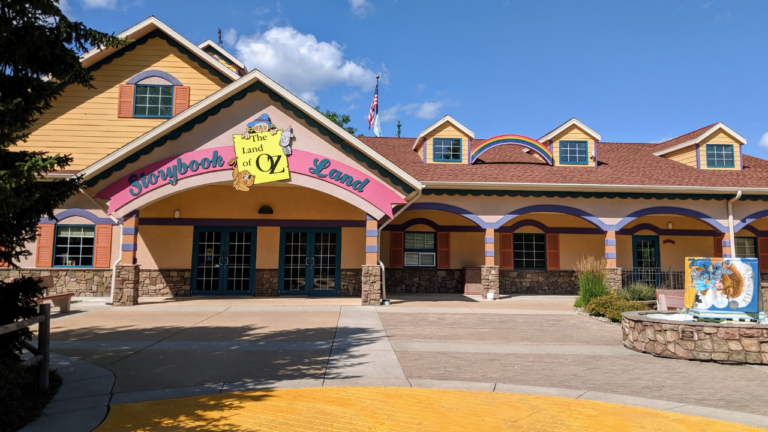 This post may contain affiliate links and we may earn commissions when you make a purchase through these links (at no extra cost to you). See our disclosure policy for more details. Storybook Land and Other Adventures in Aberdeen, South Dakota Planning a trip to Storybook Land in Aberdeen, SD and wondering what it’s like?… 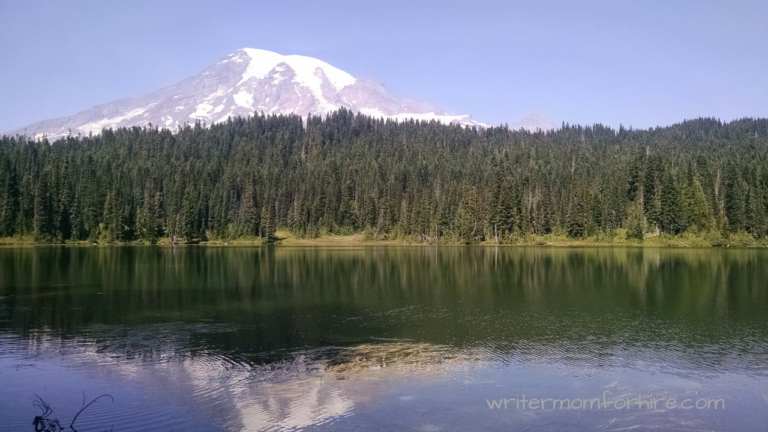 This post may contain affiliate links and we may earn commissions when you make a purchase through these links (at no extra cost to you). See our disclosure policy for more details. Family Hiking Tips for Parents With Toddlers + Young Children Mount Rainier National Park was at the top of our list of must-see…

Make Over Your Mornings in Just 7 Days!

Sign up for the Morning Makeover Challenge and start making meaningful changes to your morning routine right away.

Please check your email inbox to confirm your subscription and start Day 1 of the Morning Makeover Challenge.

If you don't see it right away, please wait a moment or check your junk mail.

The Writer Mom is a participant in the Amazon Services LLC Associates Program, an affiliate advertising program designed to provide a means for sites to earn advertising fees by advertising and linking to Amazon.com.